As one of my critique partners, Karla has been a huge part of my writing journey. I can say with experience that she gives excellent and thorough advice. And luckily, she’s agreed to share some of that here, along with the chance to win her new picture book, Marie Curie and the Power of Persistence, a story about science and perseverance that’s definitely needed right now. See the details below on how to enter. In the meantime, enjoy Karla’s sage advice on how to show not tell.

Thanks for talking about this hard-to-pin-down topic of how to show not tell. With that, I’m going to turn the rest of this interview over to you to explain how to do this.

Johnell – thank you for inviting me on to your site and giving me a chance to launch my Show Don’t Tell blog series. I also appreciate the chance to share a little bit of information about my upcoming debut picture book “Marie Curie and the Power of Persistence.”

What is Show Don’t Tell?

I’ve been doing PB critiques for many years and have read hundreds of manuscripts. Time and again, the two things that come up most often in my feedback is the importance of structure and showing vs telling. Structure is fairly easy to understand, but showing is a lot more elusive and difficult to explain. I always find it easier to simply point out instances of showing (or telling) in my client’s work, and to analyze why those scenes worked (or not). Eventually, my clients begin to internalize these moments and acquire their own instinct for when they were showing vs telling.

I’ve wanted to do something similar using books that have been published and are accessible to any reader. My hope is that by understanding (and assimilating) these tips, it will become more instinctive in our own work.

I thought I’d start with my book since I know it pretty well. Also, when I wrote it, I was very deliberate about finding ways to show what I wanted to convey so it’s easier for me to point out those instances.

I do want to say, this is simply my opinion and readers are welcome to disagree. I do not claim to be an expert on this. However, to the extent this sheds some light on this very elusive but important storytelling rule, I hope it helps.

Marie Curie and the Power of Persistence

Biographies are challenging to show vs tell since they are, by their very nature, a re-telling of a person’s life story, but there were a few things I wanted to achieve in this story.

(1) Goal: Show that Marie Curie was not a one-dimensional character.

While I wanted to highlight Marie Curie’s accomplishments, I also wanted readers see that she was more than just a brilliant scientist. This was for two reasons: (a) none of us are singularly defined by one thing, so making her one-dimensional would also make her unrelatable; (b) I didn’t want to convey the message that our story only matters to the extent that we are successful and famous.

What I did: I chose to focus on (i.e., not just reference) other non-scientist aspects of her life and work; traits that were equally important to Marie, and that defined her from beginning to end.

After doing a great deal of research, it was clear that perseverence was a constant thread in Marie Curie’s life. So, I framed the story as one of perseverance, showcasing a personal trait that was clearly important to her and played a big role in her life (and ultimate success).

Why it works: Framing Marie’s story as one of perseverance makes her relatable to readers (young and old) who may not know what it means to be a famous scientist, but they absolutely know what it means to persist in pursuing one’s dream. Also, it conveys the message that the reason Marie’s story matters isn’t because she became a famous scientist, but because was always perseverant.

(2) Goal: Show that one’s life story can be told in many different ways.

What I did: I chose to relate Marie’s story as a super hero adventure. Because, truthfully, why should a remarkable woman not be allowed to define herself as a super hero?

Why it works: By breaking with the “mold” of how we are to understand and talk about a woman like Marie Curie, I invite readers to evaluate the “molds” that define them, and perhaps re-frame their own life stories. 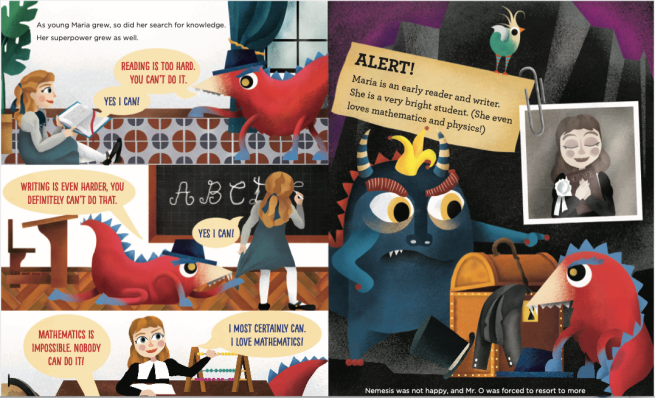 (3) Goal: Show that Marie Curie was a strong and empowered character.

To prove this, I put her challenges front and center (indeed, they represent a main character in the story, Mr. Opposition). Rather than focusing on her ultimate accomplishments, I focused on the power (the real story) that helped her reach those accomplishments.

A second way in which I tried to show her as an empowered character was to have the antagonist be the one who transformed. She knew the truth about herself from the very beginning (“I will persist”). I wanted her to be steadfast in this knowledge and show how it was the others who needed to accept this truth.

Why it works: Children (and grown-ups) often doubt themselves and the truth they know about who they are or want to be. My goal was for readers to see Marie Curie as heroic not because she was an accomplished scientist, but because she believed in herself and persisted in that belief despite the fact that she met with so much opposition. I wanted readers to see that they could believe a truth about themselves and the world could change to embrace that.

Thank you for all this great info! Any final thoughts?

For me, showing vs telling is about proving to the reader what you want them to believe. It’s about helping the reader reach the truth rather than telling them about it. I hope I’ve done that in Marie Curie and the Power of Persistence. If nothing else, I greatly enjoyed researching this remarkable woman and sharing her super power with the world and with your readers.

One fortunate commenter will win a copy of Marie Curie and the Power of Persistence (U.S. mailing addresses only). To enter to win, simply comment. If your name isn’t obvious in your avatar, please include it. The contest will close on June 1 at 9 a.m. EDT. Thank you, the drawing is complete. Sue, you are the winner! I will contact you directly.

For more information about the book and the author:

Marie Curie and the Power of Persistence is the first book in the “My Super Science Heroes” series (Sourcebooks). 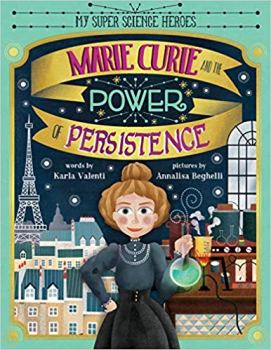 This series uses a novel storytelling approach to bring this historical figure to life for readers, both young and old. Written and illustrated as a dynamic superhero story, Marie Curie and the Power of Persistence introduces children to Marie Curie as an important scientist whose greatest achievement was not the discovery of radium and polonium, nor having earned two Nobel Prizes, but rather for her extraordinary power – the power of persistence.

Throughout her life, society and institutional limitations threatened to block Marie’s progress. Determined to become educated and successful, Marie Curie persisted. Marie’s unfailing persistence was a recurring theme and played a critical role in her success. In her super science hero story, this power plays an equally important role as Marie must rely on persistence during her ongoing battle with her arch nemesis, Mr. Opposition. In this way, Marie Curie represents an important role model for girls and boys who face their own version of Mr. Opposition.

Marie Curie and the Power of Persistence is unlike any other children’s book about historical figures, and it is sure to inspire countless young scientists (and non-scientists) as they develop their own super powers.

Karla was born and raised in Mexico city, but has put down roots in many places around the world (including Japan, France, and most recently Germany). She currently lives in the Chicagoland area with her husband, three kids, two cats, and hundreds of books.

Karla writes picture books and middle grade novels. On the picture book front, she is the creator of the My Super Science Heroes series (Sourcebooks). The first book (Marie Curie and the Power of Persistence) released on April 7, 2020. The second book in that series (Alan Turing and the Power of Curiosity) is due out in January 2021. On the middle-grade front, her debut novel, Loteria, sold at auction to Knopf in a two-book deal. Loteria is scheduled for publication in 2021. Karla offers a Master Course on Picture Book Writing and does professional PB critiques. She is represented by Ammi-Joan Paquette at Erin Murphy Literary Agency.